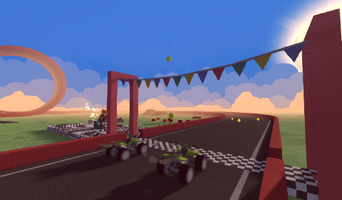 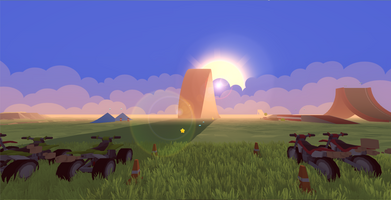 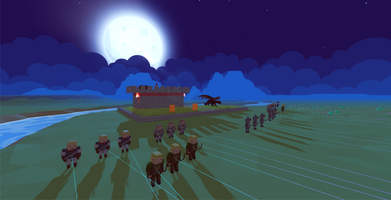 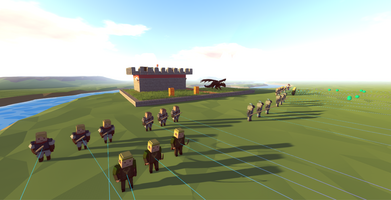 First off, I should mention that last week  Super Voxel World hit the top 5 popularity list on itchi.io for a few different categories / tags, such as #sandbox and #co-op. How cool is that? I've gotten lots of great feedback from players and even checked out a few player created worlds made by itch.io members. What a great community. You guys rock!

On to the update! New vehicles, new items, a new showcase world, and better code. While there is a lot of new stuff here, I'm still spending plenty of time polishing the game and getting it ready for a stable release.

The biggest change you'll notice comes in the form of the new items : the ATV, the Dirtbike, and the Sprint Car. These are all all terrain vehicles that are meant to drive up mountains and boost through jumps. It's been a lot of fun developing a vehicle system and watching them interact with the existing gameplay mechanics. Vehicles can bounce on mushroom blocks, ram into exploding barrels, barrel over NPC's, collect coins,  energy powerups, and all sorts of nifty things.

After playing around with the vehicle physics for a while, I found myself having a lot fun just driving around the procedurally generated environment, boosting and ramping over the faceted mountain surfaces. It turns out mixing arcadey vehicles and infinite terrain is a lot of fun. After adding in an air control mechanic, you can now do flips and spins. Nailing your landing at just at the right time is always satisfying.

And of course you can't have vehicles that can do flips without ramps! There are 24 (!) new items total, mostly centered around driving. There are some particularly fun ones worth mentioning such as the "loop the loop" ramp (try it in first person mode), launch ramp, and a giant tennis ball you can ram with your cars. I'm thinking a Rube Goldberg machine with the tennis ball and electric system could be good fun.

On top of the vehicle system I spent some time optimizing the net code, especially the physics syncing. Vehicles consume very little extra bandwidth - mainly the it's animation state (boosting, skidding, etc), and velocity. The position and rotation is piggy backed onto the player network view, which saves quite a bit of bandwidth and messages/second. In short, it means we can have vehicles without it costing us much. There is still some physics syncing to do for remote players against authoritative physics objects, but I'm pretty happy with the current setup.

More to come soon! And don't forget to leave a comment and join the Discord channel!

Super Voxel World is a creative sandbox packed with features to help you unleash your imagination.

New guns will be in the Steam version :)